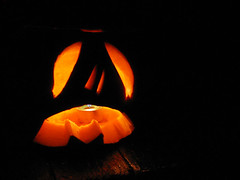 Nothing terribly artistic or inspired this Halloween, folks. It's a pretty straight-up Jack hastily carved to protect the house in the Crossing. Even though this is far from my best work - I'm happiest with an assymetrical face I carved about three years ago that looked to be resting on the cusp of inspiration and madness - I still wanted to share since the setting of the year's lit Jack is a small but important ritual I follow to ease in the new year. The ritual's origins are about as storied as those of my old ale brewing on the eve of the year's first snow, but I'm claiming it as tradition nonetheless.

The Jacks aren't usually seen by many living eyes. Generally, I won't put them out until the trick-or-treaters have long since given up, not that this has been much of an issue in the past couple of years. Seems that tradition got killed by overprotective parents fretting over the latest media warnings about how dangerous neighbors/streets/masks/holidays/aliens/stray moose can be.

Still, that's not really what I wanted to talk about. Plenty of time for that later.

Just before the pumpkin was carved, I retired my favorite stockpot. It was a large, white enameled piece that was made in Spain, and I can still remember the day that I picked it out and decided that it was a good idea to spend the $45 or so on the sticker. It had a good run, and has seen me through easily fifteen years of soups, stews and sauces. I'm convinced that it would have lasted me a fair bit longer but for having gotten scorched sometime last year. That incident proved just a little too much to bear, and the enameling developed pockmarks in the bottom of the pot. With the most recent garbure, the pot learned an odor that no amount of scrubbing could resolve. In contrast to the Jack, the pot was disposed of without ceremony. I did promise myself that it would be remembered here, however.

Most of my day was otherwise focused on jury duty in Lowell, a task that represented a great deal of waiting followed by becoming fascinated with the courtroom procedures that make up the selection process. I was lost to the panel thanks to a peremptory challenge, likely on the part of the defense attorney. Being a criminal case being heard in Superior Court, it promised to be more interesting than some of the proceedings I've witnessed. Nevertheless, I was happy to be excused since we were promised that the trial would be prosecuted as quickly as possible, but that jurors should anticipate at least three days for the trial.

As I was getting dressed to go to jury duty, I discovered the laminated obituaries for both my grandfather and my uncle in my overcoat. I had forgotten I had left them there. In fact, I can't remember why I needed my coat in June. Was it raining? It was on the day of my grandfather's ceremony. I remember that the rung of the casket was slippery, and that I was a little concerned going down the stairs of the church that it might slip. I was reflecting on that cold mist and that I hadn't really had occasion to dress since Patrick's funeral most of the drive north. It's funny how we think about things like this. It's funny even how these reflections seem right in this post about jack-o-lanterns and stockpots.

That's where I'll leave you. I hope you can find sense or meaning in it all.
Collapse