After a brief training a few of us were tasked with Operation Moose and Squirrel. Over the next few days, we've been charged with the care and feeding of friends' pet flying squirrels. "People keep flying squirrels as pets?!?" you say? Yes. I have proof, and it is adorable: 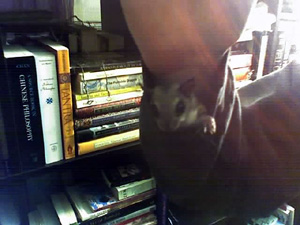 Stage 2 went off without a hitch, though the girls didn't seem terribly interested in acrobatics last night. Instead, they contented themselves with running around inside my clothes, poking their heads out just long enough to see if I was about to feed them nut bits. They chittered briefly when they found each other in the crook of the same arm (apparently, a prime resting spot), but otherwise seemed perfectly happy exploring and/or hiding themselves from me on my person. We played 'Hunting Goblins in the Fanghorn' for a while, then they chilled (in opposite sleeves) while I caught some Futurama.

No real problems putting them to bed, although Ruby demonstrated handily that she's far more adept at getting nuts away from me while I'm trying to coax her out from behind the couch than I am at capturing her.
Collapse