Two young men got onto my train today somewhere around Harvard. I’d say it was definitely Harvard, but I was sleepy, and they probably wouldn’t have registered at all if it weren’t for what happened later. The one was stocky, bearded, and sporting multiple facial piercings but no shoes, evidenced by pudgy toes poking out from beneath his floppy pants; the other, less descript though notable for his heroic attempt at a goatee and his classic hoodie and camo fatigue ensemble. Each had a couple of blankets tucked under an arm and as we bumped along, they discussed current and future plans. 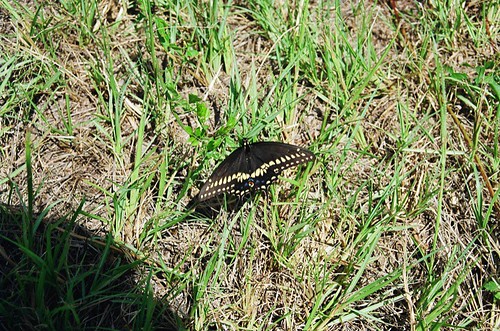 This shot, complete with my own hanging shadow, is notable solely for being my first butterfly shot not taken in an enclosure, and for being taken with a fully manual Nikon film SLR.
Collapse